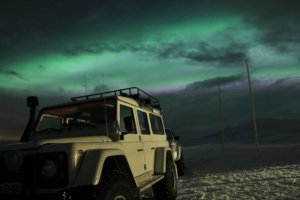 Well-Heeled had a great article on traveling as the Spending Holy Grail . The post got me thinking, “what is it with personal finance bloggers and traveling?”

We rant and rave about the envy surrounding material possessions, the vanity of keeping up with the Joneses, and the evils of debt – yet most, if not all, of us has written at least one article about some planned or actual trip without concerning ourselves over the cost (or at least trying to justify them).

Just like JD Roth, the thrill of traveling comes from the experience itself, the people you encounter, and how you grow from it. He chronicled his journey through Africa and what he learned while there. Notice the focus on the people he met.

With our 1-year anniversary coming up this weekend, I reflected upon our own excursions. Since we’ve been married, my wife and I have been to Belize (honeymoon), Iceland, Niagara Falls, and will be going to China this November.

We’re months away from our trip, yet are already discussing “what’s next”. Curacao or Hawaii are potential options right now, though we’ve mentioned at least a dozen other countries!

A review of incurred costs reveals traveling is quite the expenditure for us. Sure, we are saving aggressively. We never carry a credit card balance. We have zero debt. We have a robust net worth for our age, but does this qualify us to spend indiscriminately on travel?

There’s a saying I’ve heard which goes: “You can have anything in the world, but you can’t have everything”. I absolutely love the sentiment because it doesn’t limit you in what can be obtained, but rather forces you to recognize choices must be made.

Ramit Sethi championed this idea with the term “conscious spending”. He outlined the habits of friends who spend $5,000/year on shoes and $21,000/year on going out and how they are justified in their spending.

Instead of thoughtlessly spending money on whatever crosses our paths, people engage themselves into determining what it is they truly value. What you personally decide to spend money on doesn’t particularly matter, so long as it’s what you decide is important and not what you think others are expecting you to spend on.

Even with billions of dollars, you could have anything in the world, but not everything.