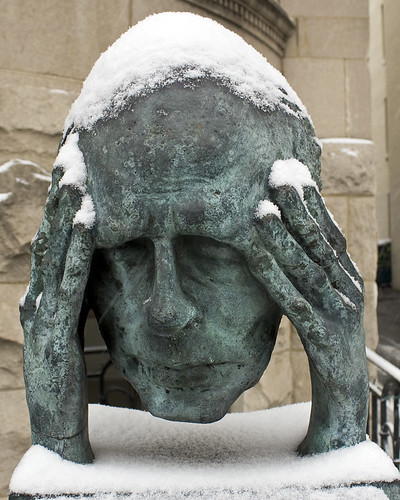 There is a real danger in how people rationalize expenses.

I once heard a story that almost brought me to tears. This friend of a friend had close to $80,000 in student loans. Although that’s sizable, I had no interest in casting judgment until I was given the second piece of information – he recently purchased a $12,000 engagement ring for his fiance. The reason?

It’s a sad scene, but it did give me a laugh. It reminded me of a Simpson’s episode. After digging a deep hole without an exit strategy, Otto asks how they’re going to get out to which Homer exclaims, “We’ll DIG our way out!”

Back on track, people often take a known condition, establish it as the comparison benchmark, and then base all future decisions on that reference. In the example story, the ring price was compared to the overall debt obligations. Removed from that relationship, reassigning the context paints a very different picture.

Say he needed a ring and car at the same time. Spending the same amount on a ring as you would for an entry-level sedan seems exorbitant. Point being, the $12k spent is still $12k no matter how you look at it. The money is not of any less value simply because you’re spending more of it elsewhere.

Now let’s look at another example of this – cell phone plans. Carriers smartly marketed their add-ons by compartmentalizing them. In relationship to the primary plans, these features seem negligible in cost. Assuming you’re plan costs $60/month, what’s a measly $5/month for texting? When that rationale is compounded, you could end up with a plan costing $100/month, roughly 70% more than you probably originally intended.

Now there’s a new marketing tactic which takes the opposite approach. Because carriers are so generous, they’ve decided to offer us a “complete” package for an easy $100/month. Problem solved right?

Not exactly, unless your usage exceeds the cost (i.e. separately your plan would cost more). Otherwise, you are under-utilizing your plan. Your primary plan costs $60/month and you have $20/month worth of add-ons. You never exceed the limits, but decide to opt into an “all-inclusive”plan for convenience. Now you’re paying $100/month for the same services, or a 25% premium.

Both of these cases are good examples of inefficient systems. As I’ve summarized before, EngineerYourFinances will be looking at how you can OPTIMIZE your own financial system and work towards that ultimate pie in the sky – FINANCIAL SECURITY.

Along the same lines, I read a book a while back that talked about this same topic. Ronald Wilcox’s book, Whatever Happened to Thrift, addresses this notion in Chapter 3: Psychology of Money. An overall quick and entertaining read, that specific chapter focuses on a lot of the self-imposed expectations that end up hurting us financially.

To recap, our method for justifying purchases generally leads us to spending either:

a.) more money than we originally intended, or

b.) additional money that we hadn’t originally anticipated.

So try it out!

Next time you’re making a purchase plus accessories, take a step back and ask yourself if you are buying the accessories because of a true need or if you are rationalizing it against your primary purchase.

If you can say that you would by this item separately by itself – then go ahead and get it. If you can’t, think twice about it.

Remember, $1 is still $1 whether you spend a few of them or hundreds of them.