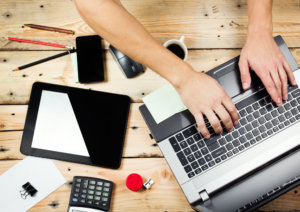 According to a survey conducted by the Freelancers Union, 34 percent of the population, or about 53 million Americans, make money freelancing. Freelancing can be a great way to work on your own schedule with more freedom to make choices, but there are also many financial pitfalls that you must be aware of to avoid money issues. These freelancing money traps are easy to avoid if you know what they are and how to prevent them from affecting your finances. Here are the five most common freelancing money traps and how to avoid them.

Out of all of the freelancing money traps, the most common one is the failure to document freelancing income properly. Freelancing is not like a normal job where you would receive a W-2 at the end of the year documenting all income made and taxes paid. If you are not careful, failure to document your income can lead to issues with the IRS, audits, and financial penalties. Keep copies of all payments made to you and all expenses paid by you for several years to ensure you have documentation of your income if needed.

Failure To Report Income To IRS

The IRS treats freelancing like a small business, and all established freelancers know that you’re supposed to estimate and pay your taxes on a quarterly basis (April 15, June 15, September 15 and January 15). Making late payments, or not making them at all, is a good way to fall behind with the IRS. The most common issues that arise are owing back taxes and receiving penalties for not paying taxes on time. Make paying your taxes on time a priority.

Failure To Save For Retirement

Failing to save for retirement is another of the most common freelancing money traps to avoid. The National Institute on Retirement Security recently released a study showing nearly 40 million working-age households have no retirement savings at all. It can be difficult for freelancers to save for retirement because their cash flow is often sporadic, but it’s very important for freelancers to do. Start small and save what you can now, then increase your contribution amounts as your income increases.

Failure To Prepare For Emergencies

Having an emergency fund is also very important for freelancers. An emergency fund can hold you over while you are waiting for invoices to be paid or provide you with money if you happen to lose a big client. Put a portion of each payment into an emergency fund to ensure you have money available for the tough times.

Not having health insurance can result in a number of financial issues for freelancers. Its a huge financial risk if something happens to affect your health, as you will be on the hook for all of the costs yourself. It could also lead to financial penalties during tax time, as the federal government has mandated that all adults must be covered by some type of health insurance or pay a fine. If you’re young and healthy, choose a low cost insurance policy with minimal coverage to hold down your expenses.