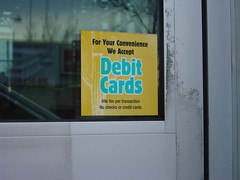 Humans have the innate ability to control environments. The easiest example to pull out of the hat is the domestication of wild animals (dogs and horses). If we have this preference towards control, then why do authors suggest debit cards as the “solution” to credit cards?

If you looked at the [purely factual] differences between the two, the undeniably clear winner would be credit. Of course, there are personal and behavioral influences that come into play. I’m only looking at a line-by-line comparison between the features of each.

Second, the irony is that debit cards don’t actually curtail people from spending any less than they would normally. I’ve heard numerous stories of people incurring overdraft fees, REGULARLY. Still having less money than they would like at the end of the month, and worst of all, not being able to pinpoint what the charges were or why they went over.

By no means is this an absolute, but as I see it the problem remains superficial solutions. Instead of focusing on the internal issue such as the user’s lack of discipline, a band-aid solution like “use debit cards” allows an author to address a problem while sidestepping any criticism. So despite the criticism I might draw, I want to try and address the heart of the matter: your discipline.

“Unless discipline is exercised in managing cash flow, then the form in which you make those transactions is irrelevant.”

People trade plastic, paper, and even their word to get what they want. If you’re unable to control yourself and say “no” once in a while – your plastic will be denied, you’ll have no more paper, and your word won’t be good anymore.

I’m not the only one that believes this to be the case – check out Financial Samurai.   As summarized in the about page,

“A Samurai is a noble, disciplined warrior… The world of finance is full of traps, taking tremendous skill and discipline to artfully navigate through the dangers.”

However, I don’t want to trivialize the effort which discipline requires. I plan to expand upon this idea more in future posts (this may end up becoming a series), but for now let’s simply lay the foundation.

The only D in your vocabulary should be Discipline, not Debit.