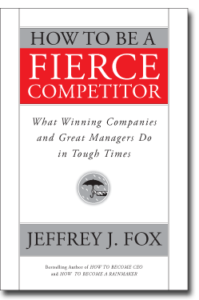 After reading his book How to Be a Fierce Competitor in one sitting, it seemed necessary to contact author Jeffrey Fox about doing an interview. Half-expecting not even an acknowledgment email, he surprised me with a quick, “I’d be delighted” response.

While performing my due diligence, I learned more about Mr. Fox’s impressive (and extensive) accomplishments. Following the submission of my questions, I was equally caught off guard when he replied, “Your interview questions are very good. So good that I think the best way to do the interview is via phone”. He graciously gave me over an hour of his time. I jotted down notes while we spoke, so his responses are paraphrased below.

FE: Looking back on your career, you’ve created quite the legacy. Under the belief that all our experiences build on each other, there’s still those 1 or 2 “defining moments” that set our course for better or worse. Can you recall what those were for you? Was it graduating from Harvard, starting your own firm, authoring your first book, or something more out of the ordinary?

JF: Yes, there were two distinct instances I recall. The first was back in high school.

Collaborating with my good friend, we went on to win 4 or 5 science fairs at the regional level and I think even at the national level. My friend had all the mechanical abilities, and figured out how to make these projects actually work. I was the one to come up with the ideas. We created a camera to photo snow for $14, we ran wheels through brine at different speeds to show corrosion rates, and we created an optical illusion using convex lenses.

Through these I began to understand positioning and realized it’s importance. I think a lot of the reason we won wasn’t just the projects, but our presentation. For example, we were supposed to be doing a biology project. While everyone else was growing plants, we created an illusion were an image was inverted through lenses. This had absolutely nothing to do with biology until I realized the resemblance to our eyes and the similarity to the process they perform (converging lenses).

The second was my application to Harvard Business School. I had the grades, but knew I needed something to stand out. After a presentation at our school, I went up and asked the representative, “How do you get in”. He replied, “All these years I’ve been doing this, no one has ever asked me”. He went on to explain that grabbing the attention of admissions and getting them to read your essay was a big component.

During that time, there was an ad campaign with the slogan, “Keyed up executives unwind at the Sheraton”. The ad had a businessman with one of those giant keys in their back. So I got a Ken doll and wind-up toy. Dressing the Ken doll up to look like the businessman, pasting a photo of my face on the doll, and attaching the key part from the other toy, I sent the makeshift doll along with the note “Wind me up at Harvard” to the director of admissions (Anthony Athos).

All my friends had told me it was too gimmicky, too much of a risk, and I shouldn’t do it. But I disregarded all of their advice, and went on to attend Harvard Business School. So it wasn’t simply winning those science fairs, but learning how to understand your market. Nor was it graduating from Harvard, but the process of getting in.

FE: You’ve authored an impressive 11 books in the past 12 years. That’s almost 1 book per year! What prompted the decision to pursue writing in the first place, and how were you able to maintain that explosive growth? If I had to guess, I’d say the books were already written in your head and it was simply getting pen to paper.

JF: Purely by luck. I’d been putting together ideas for kids of friends as a favor. Being asked to speak to a graduating class as a trustee at Trinity College, I gave a spiral-bound collection of these ideas as a gift. Very simple, nothing fancy – something you’d make at Kinko’s. Without my knowing, these kids began making copies and distributing to their friends. The little book made it all the way from Connecticut to California, and a publisher contacted me saying, “I think I have a copy of your book”. It was the first time I found out it was being copied.

Giving it the title, “How to Become CEO” – we made it look like an actual book. It got bumped up to a publisher who offered $50k. I asked them if that was good and they said for a “non-celebrity, no-name” it was very good. I told them I’d think about it. Then another publisher came in with a pre-emptive offer of $125k. I asked them what that meant, they said the offer was only good until 3pm that day. I said I’d think about it, then told them let’s do it. The book went on to become New York Times bestseller and was published in over 35 languages.

Yes, you’re right. Most of these ideas were already in my mind and it simply was getting pen to paper. None of these are based on research, only my observations and intuition.

Many of the books are well acclaimed. How to Become a Rainmaker was on the Business Week and Wall Street Journal best seller list along with being voted “1 of the best 100 business books ever written”. How to Become a Great Boss is required reading at large corporations like General Electric and Perot Systems.

FE: While we were introduced through your most recent book, How to Be a Fierce Competitor, your first book, How to Become CEO, was published in 1998. Do you ever take the time to review those earlier works and see how the information has changed with time? From what I read, I’d say the information is timeless – but maybe you’ve noticed a few tweaks here and there?

JF: To be immodest, I think they are both timeless and timely. That’s a very distinct characteristic not many authors can achieve. It just happened this book was written before the professional landscape changed. Not sure about tweaks yet, but again that’s because I believe the information is timeless.

The convergence of algorithmic and hardware technology have brought about this tsunami of information. Personally, it seems to be wasted time, and I’m not wholeheartedly convinced on viability of information and feel people are missing the message, which is most information.