Don’t believe any of the “stealth wealth” scenarios you see in the movies — like being able to wire money from the U.S. to a numbered account in Switzerland without anyone finding out. 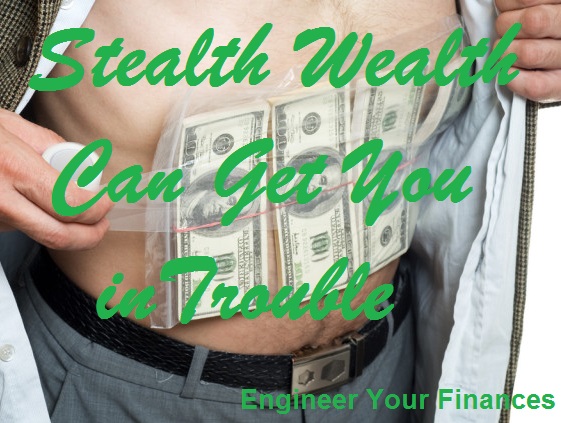 In real life, tax or legal authorities eventually catch up with people who try to hide their money — even in offshore accounts.

The U.S. has reciprocal tax treaties hashed out with most foreign countries so that each side can repatriate funds owned by respective citizens, so complying works to everyone’s benefit.

When the alternative to compliance is a possible trade embargo by the world’s biggest economy, most foreign banks choose to comply with requests for information.

U.S. laws require financial institutions to report any transaction of $10,000 or more along with anything that might look suspicious.

This law also applies to any U.S. branch of a bank based in a foreign country, along with electronic payment vendors of all stripes (pun not intended).

These fines have amounted to hundreds of millions, if not billions of dollars, over the past few years, according to estimates by PwC.

Attempts to hide money don’t have to leave the country to rankle the U.S. Internal Revenue Service. The agency has a growing web of resources for detecting attempts to avoid taxation.

It starts with several decades of laws that make it easier for the IRS to catch those involved in terrorism, drug trade and money laundering.

Then on top of that, the agency continues to upgrade the technology used to detect patterns of behavior that suggest all of the aforementioned crimes.

The Other Side of E-Filing

A component of all this includes the technology enabling taxpayers to file their returns electronically in order to obtain refunds faster.

Similarly, businesses have numerous incentives to report payments to vendors, contractors, and employees in exchange for more favorable tax treatment.

The IRS matches all of these reports against one another in its computer system to determine whether anyone neglected to report any income or other stealth wealth.

As the agency discovers these discrepancies, the IRS sends out letters to taxpayers asking for the amounts not paid. Timely payment can minimize fines or penalties, but usually doesn’t eliminate them.

If you ever receive one of these letters, it’s in your best interest to pay in full as soon as possible. And if you don’t have the money to pay, contact the IRS about setting up a payment plan.

Just communicating with the IRS about this can save you lots of grief in the form of fees and penalties that would otherwise grow over time.

In fact, it behooves you to grovel or otherwise brown-nose in these situations. The IRS can obtain a court order to garnish your wages or seize your property, and doesn’t need your consent to do it. This usually leaves a black mark on your credit report for seven years.

Additionally, the IRS has the power to confiscate your passport if your tax delinquency reaches $51,000 or more — that puts a damper on stealth wealth real quick.

All of these outcomes could be avoided by simply not trying to hide your money from tax authorities. Get over the stealth wealth idea that you might have gotten from the movies and instead pay your share.

Pay for Things That Benefit You

And it’s not like you’re just giving money away when you pay taxes — a chunk of it goes toward funding your retirement benefit from Social Security. The rest pays for government services that benefit you.

You don’t even have to agree on that point — if you want to redirect your money to a nonprofit cause you believe in, it’s possible to do that. Donate to charity and then itemize the deductions, although you need to make a big contribution before you can itemize.

The extra trouble required to make a big enough charitable donation that you could itemize might seem like a hassle, but it beats the heck out of all the punitive alternatives.

Readers, have you wished you could find a legal way to hide your money?