Ever since the World Bank published its dire prediction for global remittances this year, economists have been bracing for the worst. The outlook calls for a 20% drop in remittances to low and middle income countries in 2020 as a result of the COVID-19 fallout, serving a blow to the households that are already living in poverty. Despite the fact that developing countries are poised to take the biggest blow in money transfers, Mexico — which received a record $36 billion in remittances last year — has managed to buck the negative trend that has gripped much of Latin America.

Mexico’s central bank, the Bank of Mexico, revealed that that the country in June received more than $3.5 billion in remittances, up 11.1% vs. year-ago levels, beating even President Andres Manuel Lopez Obrador’s bullish estimates. These results reflect a 9.4% rise in the number of remittance transactions and a 1.5% increase in the average money transfer amount to $340, according to BBVA Research. More than 95% of remittance payments to Mexico are sent from the United States.

Second-quarter data reveals that the remittance flows were not spread evenly across the country. Northwestern Mexico and the states of the Bajio region saw strong flows unlike much of the Central and South/Southeastern areas, where there was a drop-off in money transfers.  BBVA Research surmises that these results could be the result of the following possibilities:

Meanwhile, In the first six months of the year, remittances to Mexico were approximately $19 billion, up 10% from the previous year’s $17.2 billion.

Jonathan Heath, Deputy Governor at the Bank of Mexico, recently took to Twitter to illustrate peak remittance flows to Mexico in March. 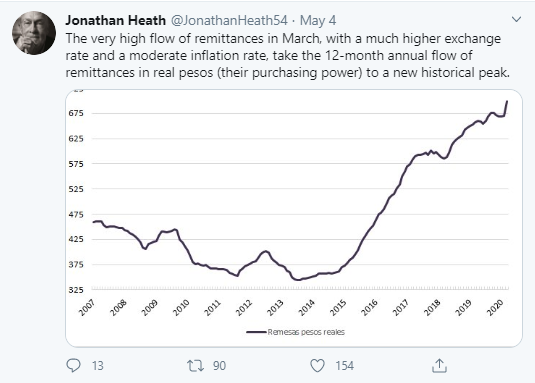 Mexico’s remittance flow data is a silver lining in an otherwise precarious situation in which the economy has been reeling from the COVID-19 pandemic. The country lacks any federal unemployment benefits as a result, poverty is on the rise, with more than half of the working population unable to afford enough groceries as of May.

While remittances have been strong, economic growth has not been, with GDP shrinking by roughly 17% in the second quarter. The crumbling economy has sent more Mexicans to the United States looking for work,  as evidenced by a growing number of apprehensions at the US/Mexico border.

The situation in Mexico is very specific to that country, not something that other governments could emulate if they wanted to. Larry Rubin, managing partner of Mexico & Latin America at executive search firm DHR International, said he was not surprised by Mexico’s strong remittance flows even in the midst of COVID-19, telling Sharemoney that he was expecting it for a few reasons.

“Mexicans abroad, with strong family values, under these adverse circumstances would be doubling up to provide more support to their loved ones back home,” explained Rubin.

Despite high unemployment, they may have the opportunity to do so. According to the Financial Times, more than half of Mexican migrants in the United States, or 60%, have the documentation required to receive federal aid, which has buoyed incomes that they can then send to their families back home.

The other half of the employment equation is that Mexican migrants tend to take jobs that have been deemed essential during the pandemic and are therefore more recession-proof, such as farming, food production and construction.

That’s not to say that it’s been easy. Hispanic unemployment in the United States is hovering at 12.9% as of July, more than twice March 2020 levels.

The Financial Times spotlights one Mexican migrant who picks vegetables for a living in the United States. He earns $11 per hour plus housing, and he was sending home bi-weekly payments of $700 pre-COVID to his dad and his young son. Those payments have since been slashed more than in half, but he is grateful to still be working.

In part, it may also be a case of the squeaky wheel getting the oil. Rubin described a “cry for help” from families in Mexico to their relatives in the United States, where most of the money transfers to the Latin American country originate, not to mention the “crunch Mexican inhabitants are feeling  due to the economic situation affecting the country even more than other similar countries.”

Meanwhile, conditions in Mexico are not conducive to social distancing measures, given the density of the population and the frequency in which people interact with one another. Those families who are receiving the remittance payments would otherwise be forced to leave their homes and be exposed to other people, Rubin explained, whether on the walk to or from work, getting food at crowded marketplaces and local stores where there is a lack of personal hygiene or social visits to stores and puestos in downtown areas.

“Their family members in the States understand these complex dynamics and thus feel even more compelled to support their families in Mexico,” said Rubin.

Favorable exchange rates have been another factor, as Mexican migrants working in the US sought to take advantage of the ratio so that their dollars could be stretched further once converted into pesos.

“Additionally, the peso-dollar parity has also played an important part in benefiting those sending money to Mexico,” Rubin noted.  Mexico is one of the many Latin American countries that Sharemoney supports for remittance payments.

According to the latest currency conversion, USD 1 = MXN 22.4. And even if that favorable dynamic between USD and MXN weakens, strong remittances to Mexico appear to be here to stay. According to Barclays’ economist Marco Oviedo cited by Bloomberg,

“They’re going to stay strong. It seems like the worst has already passed.”